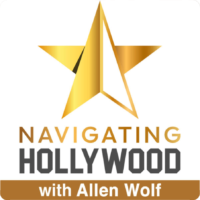 Filmmaker Allen Wolf interviews entertainment professionals about their careers and what it takes to be relationally and spiritually healthy in Hollywood. Subscribe today!

Scott discusses his career challenges, responds to critics with the deeper messages they may have missed in Halloween Kills, what excites him as a storyteller, and why he rarely smiles. […]

Scott discusses his career challenges, responds to critics with the deeper messages they may have missed in Halloween Kills, what excites him as a storyteller, and why he rarely smiles. […]

Tony nominee Elizabeth A. Davis and her husband, Emmy-nominee Jordan Richard, talk about their incredible journey through stage and television. Elizabeth’s Broadway debut landed her a Tony Nomination and launched her on a multi-year search to discover her artistic voice. Jordan has won multiple Emmy nominations for his role as a director at NBC News. […]

As a special agent for the FBI, James R. Fitzgerald (Jim) helped solve some of the highest profile criminal cases in U.S. history, including the Unabomber, the D.C. Sniper, the 2001 anthrax cases, and many more. Sam Worthington portrayed Jim in the acclaimed mini-series “Manhunt: Unabomber” on Netflix. Jim also served as a consultant for Criminal Minds and many other crime-related television shows. […]

Darren Moorman: Producer of Blue Miracle, Same Kind of Different As Me

Film and TV producer Darren Moorman has worked with top Hollywood talent and most recently produced Blue Miracle with Dennis Quaid. Darren talks about his journey as a producer, what he would do differently if he had to redo his career and the kind of legacy he’d like to leave behind. […]

Writer/Director Ricky Staub and Producer Dan Walser of the Netflix hit movie Concrete Cowboy, starring Idris Elba, discuss the story behind the making of the movie, their company’s program to help the incarcerated, and how suffering has impacted each of their lives. […]

Actress Emily Swallow shares her experience starring as The Armorer in The Mandalorian, in Supernatural, and on the CBS show SEAL Team. She formerly played a key role in The Mentalist, and performed in many other parts in film as well as on stage. […]

Filmmaker Allen Wolf shares some surprising facts and trivia about the Academy Awards®, and his own experience being an Oscar® best man. We’re also giving away prizes to listeners of the show. […]

Sheryl J. Anderson, the Creator and Executive Producer of the Netflix show, Sweet Magnolias, talks about how she started as a storyteller, the way her life experience made her uniquely qualified to create this hit show, and how her faith has played a crucial role for her as an artist. She also talks about what’s important in her life and how she has been able to get where she is today. […]

Harry Yoon: Editor of Minari & Shang-Chi and the Legend of the Ten Rings

Harry reveals how Minari was created and some of the challenges they experienced in the making of this award-winning, Oscar-nominated movie. Harry talks about how he started as an editor, what it’s like working on an independent film versus a major studio film, and how he keeps himself inspired as an artist and sharpened as an editor. Surviving in Hollywood means that Harry […]

Daniel K. Hoh, a writer from ABC’s Station 19 and his wife Deborah King talk about his career and the joys and challenges of being married in Hollywood. Dan and Deb first met at a rooftop restaurant in Santa Monica on a cool fall evening in 2010. She was a lawyer and he was an ER doctor. After getting married in 2013, Deb switched her career to corporate healthcare and made a job […]

Sarah Drew talks about her career, the definition of success in Hollywood, her roles on Madmen, Everwood, and Glee, the advice Ed Harris gave to her when she was filming her first movie, what grounds her in the ups and downs of Hollywood, and more in this candid and inspiring conversation. Sarah Drew’s first job was providing the voice role of “Stacy Rowe” on the animated […]